Beak, Feather, & Bone is a collaborative worldbuilding tool as well as a competitive map-labeling RPG. Starting with an unlabeled city map, players are assigned community roles before taking turns claiming and describing locations. Players draw from a standard 52-card deck to determine a building's purpose and then describe its beak (reputation), feather (appearance), and bone (interior). As buildings are claimed, a narrative for the town and its inhabitants emerges, including major NPCs and shifting power-dynamics.

Inspired by map-making games like Avery Alder's The Quiet Year and archetype-focused RPG systems like Meguey & Vincent Baker's Powered by the Apocalypse, Beak, Feather, & Bone is a zine-length game including rules of play, 11 community roles illustrated by Austin Breed, a map by Jonathan Yee, and optional lore & GM tips for running games in a city populated entirely by ravenfolk (or kenku, tengu, etc).

While default play is lightly competitive, rules variants for solo, cooperative, and character-focused play are included as well. Similarly, while the illustrations and GM notes provided will help inspire a ravenfolk city, the beak/feather/bone labeling system can be used with any map, game genre, or populace.

This purchase includes a digital copy of the game booklet optimized for both screen and home-printing. 300 dpi map files are also provided in PDF, PNG, & JPG for print and online use.

In order to download this game you must purchase it at or above the minimum price of $5 USD. You will get access to the following files:

Support this game at or above a special price point to receive something exclusive. 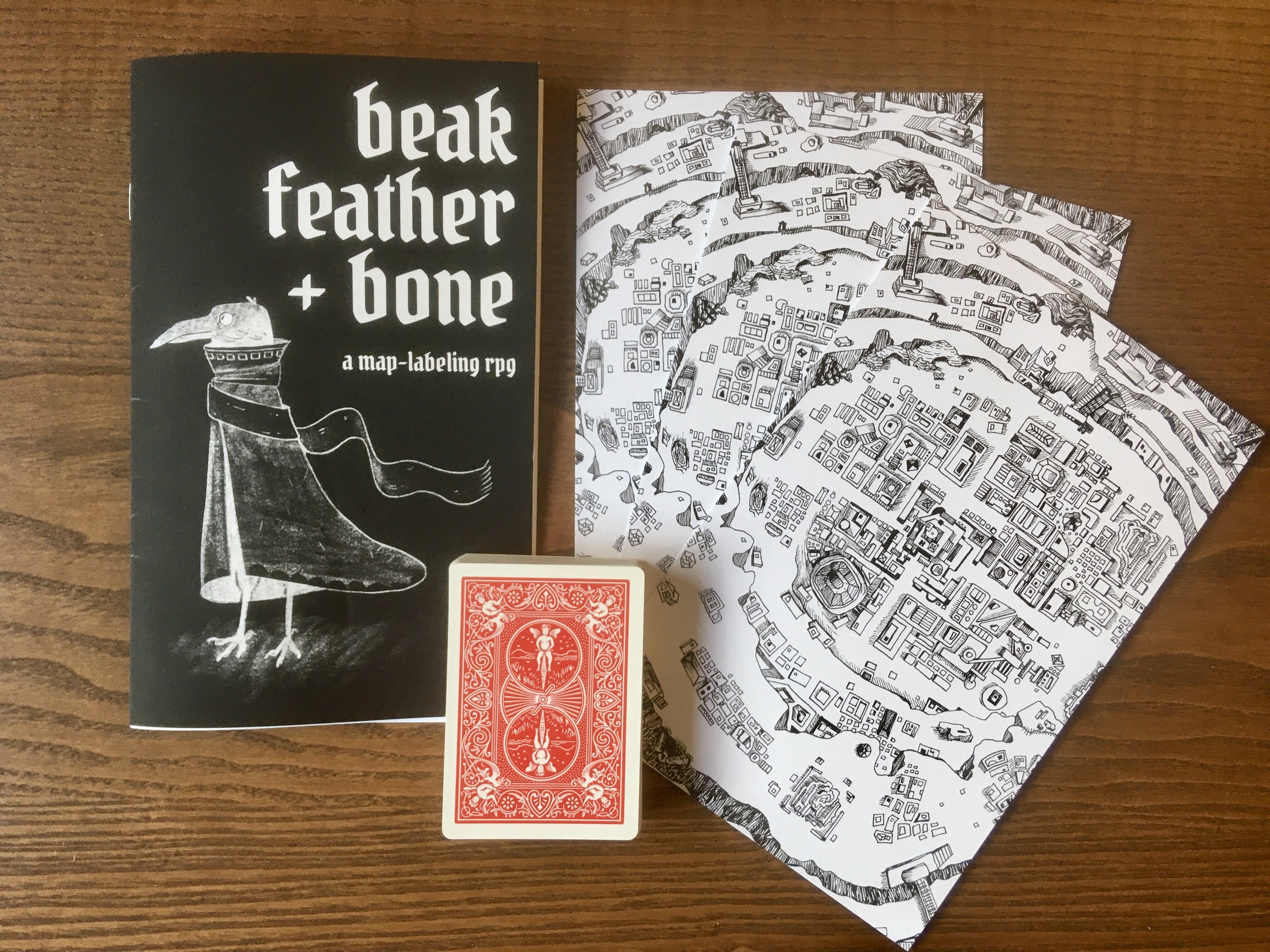 Buy at this option to purchase a physical copy of the game.

This price-point includes US shipping. Addresses will be manually collected via email following purchase. For international shipping, please order below.

Same physical contents and timeline as above, but at a price-point that factors in international shipping. International physical orders placed at the lower tier will be refunded (with apologies).

I’m trying to send physical copies to some friends for Christmas, but I’ve only put my billing address in, given that another of your asks said you’d email for the address personally should I hold off emailing the links to them and wait for your email? (I want it to be a surprise)

You're correct! While itch.io may have asked you for a billing address at the time of purchase, unfortunately, as a digital-forward platform, they don't give me any addresses for higher level rewards. It makes sense when you don't want someone to know where you live just because you downloaded their computer game, but it means I have to ask for them directly via email. You should have just received an email asking for your address info! If your email starts with "bryna," though, please email me at crumrine dot tyler at gmail dot com—unfortunately emails sent to that account address keep bouncing back as undeliverable.

Found this and opted for the physical copy (INT) but nowhere did it ask me for a shipping address. Did I miss something?

Nope! Itch.io just isn't optimized for physical products, so I have to email everyone manually to collect addresses (usually first thing in the morning). You should have an email asking for your address now!

Where exactly are the cooperative play rules? I can find the variants for solo play and for character-focused play but when I search for "coop" in the rulebook nothing seems to be there.

It's what I'm alluding to in #2 under the Multiple Roles section!

So instead of each player choosing "their" community, have as many communities as you'd like in play and decide who you want to assign buildings & points on a draw-by-draw basis. One community will still need to be given the Seat of Power at the end of the game—so it's important to track points—but it'll just be a community that's established as having the most influence in the town's story, not a player winning. Assigning draws allows you to pursue emerging storylines as a group rather than feeling locked in to "a Social building for the Miners" on your turn as well. Under these rules, if you're more interested in the Mages' social lives and building off what another player established the turn before, go ahead and assign your building and points to the Mages too! Just be aware that focusing on some communities more than others will be inherently be reflected in their influence over the town.

Got my physical copies today.  Looking forward to reading it before bedtime.  Thank you look forward to giving it a play!

Very few games are as invested in integrating art and design as Beak, Feather & Bone. It is one of the most beautiful projects to come out of zinequest, and in a lot of ways shows the future of a more collaborative, multidisciplinary indie RPG space.

Jayyyyyy! As an admirer of your work, this means the world. Thank you on behalf of Austin, Jonathan, & myself, and I'm so glad the emphasis on the art/artists as integral to the game as opposed to just flavor came through.

Missed the Kickstarter. Just realized i could grab it here. Rad. In for a book.

I apologize if I missed it somewhere, but, does the physical copy of the game come with a PDF  download as well? Thank you

Yup! The zine PDF and map images come with every purchase. Buying at the $13 (US) or $20 (INT) price points just get you a physical copy as well. Thank you for your interest!

I ordered a gift copy but had a question about it. I want to send the physical copy to my brother at an address different than the billing addy. And, I want the PDF sent to me, to not ruin the surprise. I emailed as well at your website so you can contact me directly if there’s details to discuss. Thank you

No trouble at all! I collect addresses manually via email after each physical purchase (it doesn't give me your billing addy) so you can just give me your bro's then. As far as buying as a gift, you can email it to yourself and then forward it to your brother later! It should just generate a code for you to hold onto until it's claimed by someone.

Sweet! Thanks for getting back to me so fast AND being so accommodating! i can’t wait to buy myself a physical copy too : )

I look forward to your email

I love the physical edition of the game. Great quality paper used for the cover. The entire project is very imaginative and I can't wait to try it out with a group.

This game is a fun way to introduce worldbuilding to friends who have never done it before.  It has helped me rethink they way I build detailed towns with an interesting and cohesive story.  So far.....i absolutely love it! The art is also super neat.

I used this last night to build up a city for a short campaign and my players enjoyed it quite a bit (even with roll20 being a less than ideal interface!). I now have locations, story hooks, NPCs, and a much more flavorful world to work with. Thanks for a handy, charming addition to my GM bag of tricks!

Beak, Feather, and Bone is a great and fun game in itself, but even better as a tool for creating the flow and factions of a home city for an RPG campaign. If the provided factions don’t quite match what you would want to use, you could very easily create your own list of factions and still use the process this product offers. Truly, a “must” for any world builder. 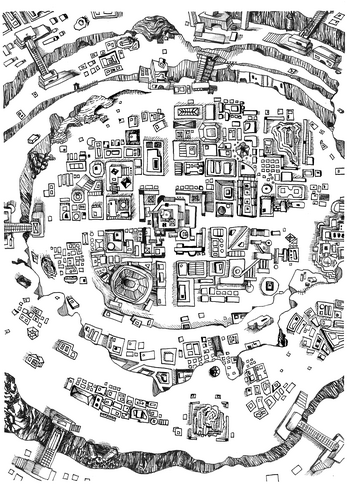 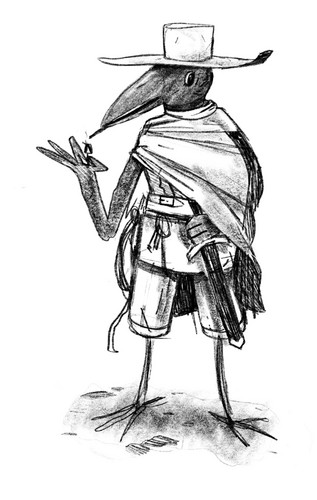 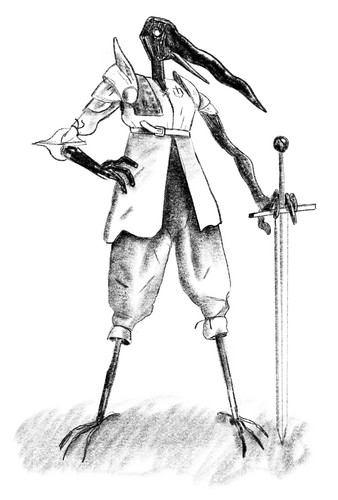 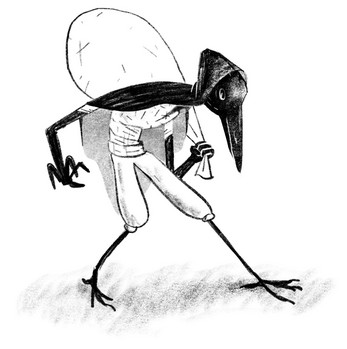 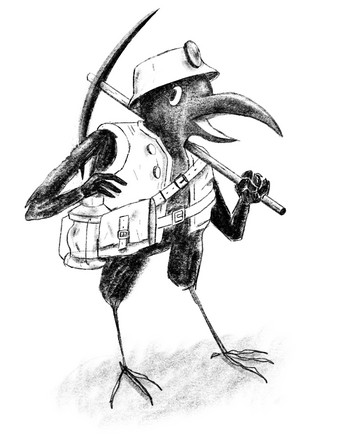